Sometimes things are just meant to be. Such is the case for Founder Jujiro Matsuda. The son of a fisherman, Jujiro Matsuda was born in Hiroshima Japan in August 8, 1875. Mr.Matsuda was apprenticed to a blacksmith in Osaka at the age of fourteen and invented the “Matsuda-type pump” in 1906. After a brief apprenticeship and eventually management, he took over the company and changed the name to “Matsuda Pump Partnership.” He would see his fledgling company’s fortunes improve when it was commissioned as a supplier to the Tsar of Russia as well as manufacturing the Type 99 rifle for the Japanese military.

Mazda Motor Corp., the most famous company from Hiroshima, may have survived the city’s infamous atomic bombing on Aug. 6, 1945, quite literally by only a split hair.

It’s a story not often told by Mazda. I heard it for the first time from its official historian during a recent visit to the carmaker’s global headquarters in this city of river deltas.

The day of the attack just happened to be the birthday of Mazda founder Jujiro Matsuda. And in keeping with Japanese tradition, he ventured downtown for a customary birthday haircut bright and early, as the Enola Gay B-29 bomber buzzed toward its target.

As he approached his regular barber, another customer was also racing for the door. But being the aggressive businessman he was, Matsuda quickened his pace and managed to stick his leg in first. He was the day’s lead-off trim, right at 7:30 a.m.

Without a wait, he was on his well-coiffed way in half an hour.

Good timing. At 8:16 a.m., the Little Boy uranium bomb exploded above the city just 50 yards from Matsuda’s barber, in blinding 10,000-degree fireball that showered the city with radiation.

By that time, though, Matsuda had made it back across town to around the current location of the Mazda Zoom-Zoom Stadium, home to the Hiroshima Toyo Carp professional baseball team.

The shock wave blew his car from the street and ejected him and his driver from the vehicle. But they were still alive. The same couldn’t be said for 70,000 others incinerated in the firestorm.

Among the victims was the younger of his two sons.

Amazingly, the factory and headquarters of his company, then called Toyo Kogyo Co., was mostly unscathed. A mountain between it and the hypocenter shielded the plant from most of the blast.

Every Japanese automaker suffered U.S. air attacks during the end of World War II. By then, they had all been enlisted, as Mazda was, into the war effort and were fair game.

But none other saw its driving force so nearly snuffed out.

Jujiro ran the company until 1951, when he became chairman and handed control to his surviving son Tsuneji.

But it took Toyo Kogyo another seven years before the one-time cork company was making four-wheeled vehicles. Would it have made it even that far, had Jujiro been late for his haircut?

Finally got some film of Bill’s fully built BT #MazdaSpeed6 as a teaser and will have more on his journey coming soon.

BEHIND THE ZOOM Forums on Sept. 24

Tristan Vautier (left) and Joel Miller are two of the BEHIND THE ZOOM presenters of this 2 day online exclusive.

The Audience: Forums are exclusive to Mazda competitors and can hold up to 100 participants.

How to Join (we recommend that you register ASAP; you’ll need to download the GoToMeeting platform):

• You will see registration links (URL addresses) for each of these race events listed on the newsletter next to the forums article that was sent to Mazda Team Members on Tuesday, Sept. 16.
• Go to the URL address and enter your first name, last name, and e-mail; then click “Register.”
• You will be prompted to download the GoToMeeting software, if you have not already done so; this process typically takes fewer than 15 minutes.

What You’ll Need: A computer and an internet connection.

Thank you for your support. We hope the BEHIND THE ZOOM resources are helpful in preparing your competitions!
-Your Mazda Family 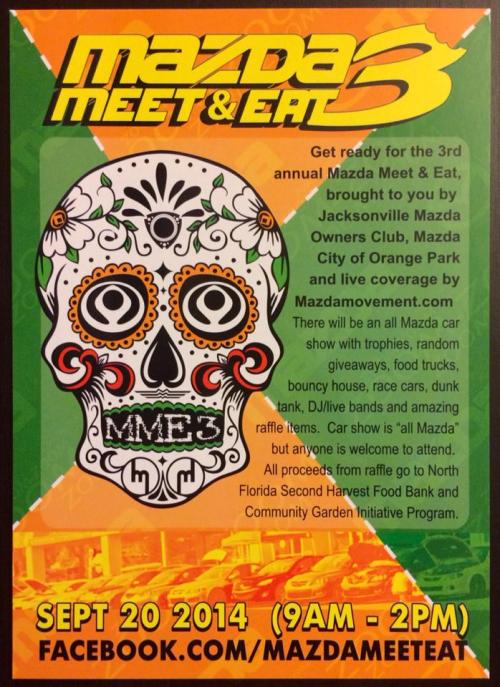 Come join MazdaMovement this Saturday Sept.20th for the 3rd annual Mazda Meet & Eat, brought to you by Jacksonville Mazda Owners Club, Mazda City of Orange Park. There will be an all Mazda car show with trophies, random giveaways, food trucks, bouncy house, face painting, big boxing glove ring, race cars, dunk tank, DJ and amazing raffle items. Car show is “all Mazda” but anyone is welcome to attend.
All proceeds from raffle go to Friends of Northeast Florida Community Gardens!

We will be broadcasting LIVE that will stream to our YouTube Channel.

Live Event coverage will be also updated continually to our Twitter Feed.